| | |
Contact Us
Home / News / Amygdalin have the best efficacy and roles

Amygdalin have the best efficacy and roles

Amygdalin (Amygdalin, derived from the Greek "almond"), also known as amygdalin, is a toxic cyanogenic glycoside found in many plants, but the most striking is found in apricots, bitter almonds, apples, In the seeds of plants such as peaches and plums. It is a glycoside isolated from the seeds of almonds in 1803 by Pierre-Jean-Lobic and A. F. Boutron-Charlard. Liebig and Weiler studied this substance in 1830. Amygdalin is also found in other Prunus plants, including apricots and black cherries, as well as in the leaves, fruits and stones of loquats. Ernst T. Krebs (Ernst T. Krebs) once named this substance "Vitamin B17" and believed that it can treat cancer, but subsequent studies proved that this substance does not have the above-mentioned effects. The academic circles also do not think that amygdalin is a vitamin, because amygdalin does not meet the definition of a vitamin.

Amygdalin is a common cyanogenic glycoside and an effective ingredient in the traditional Chinese medicine Amygdalin. It is a derivative of α-hydroxynitrile. So far, it has become a commonly used expectorant and anti-cancer drug in medicine. Amygdalin is widely found in the seeds of loquat, apricot, peach, green plum, bayberry and other plants. Amygdalin is formed by linking two molecules of glucose and one molecule of amygdalonitrile. 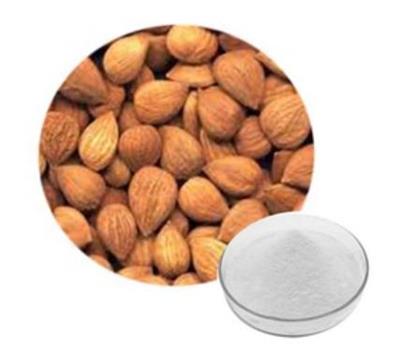 Amygdalin can be extracted by heating almonds or almonds in ethanol, then evaporating the solvent and adding ether to obtain fine white amygdalin crystals. Liebig and Waller discovered that when amygdalin is decomposed, three products are formed: sugars, benzaldehyde and hydrocyanic acid. Subsequent studies showed that amygdalin was decomposed into glucose, benzaldehyde and hydrocyanic acid under the catalysis of sulfuric acid, while hydrochloric acid decomposed it into mandelic acid, D-glucose and ammonia. There are two types of decomposition of amygdalin under the catalysis of enzymes: Maltase makes it partially decomposed to produce D-glucose and mandelonitrile glucoside (C6H5CH(CN)O·C6H11O5), an isomer of phenylacetonitrile glucoside body. Mandelase can break it down into benzaldehyde, cyanide and two molecules of glucose. This reaction occurs in bitter almonds, which usually contains free benzaldehyde and cyanide.

Efficacy of the amygdalin

Almond contains 3% amygdalin, which is decomposed by enzymes to form hydrocyanic acid. Hydrocyanic acid is toxic but a small amount has a sedative effect on the respiratory center. Therefore, the literature records have antitussive and antiasthmatic effects, and has the effect of killing typhoid bacillus and other fungi. . In recent years, domestic and foreign scientific research has proved that hydrocyanic acid also has anti-cancer effects, which is really good for human health.

Biochemical analysis confirmed that apricot kernels and bitter almonds contain an active chemical substance of amygdalin. Amygdalin is composed of three components: glucose, benzaldehyde, and hydrocyanic acid. Amygdalin can produce phenylhydroxyacetonitrile and glucose after being digested and decomposed after being eaten. Phenylhydroxyacetonitrile is decomposed into benzaldehyde and hydrocyanic acid. Among them, hydrocyanic acid is a natural anti-cancer active substance. It only has a toxic effect on cancer cells and can kill cancer cells or inhibit their proliferation. Under therapeutic doses, it is not harmful to normal cells and healthy cells; benzene; Formaldehyde has a strong anti-cancer activity and can alleviate the pain of cancer patients. Therefore, amygdalin can kill cancer cells in the human body and is an effective killer of cancer. According to the investigation of medical scientists, the residents of these areas consume amygdalin in a day, which greatly exceeds the intake of other countries in a year. This is the secret of their longevity without cancer.

Amygdalin has been used clinically in the United States. They have consumed 250 cancer patients, and 248 cases were cured under normal therapeutic doses, with a cure rate of 99%, 2 cases improved significantly, and more than 4,000 cancer patients have been cured. Our country also uses amygdalin, or almond glutinous rice porridge, almond tea to treat colorectal cancer, lung cancer, and esophageal cancer, and has achieved good results.

Recently, American medical scientists have found that almonds have a significant effect on lowering serum cholesterol. Almonds contain only seven percent saturated fatty acids, contain no cholesterol, and are high in dietary fiber. For 24 hyperlipidemia patients, after three weeks of eating almonds, their blood lipids decreased by an average of 10.3%. Therefore, for middle-aged and elderly people suffering from high cholesterol and hyperlipidemia, it is very beneficial to eat some sweet almond products and almond oil in moderation.