Naringenin is a flavorless, white to light yellow flavanone, and a flavonoid. It is the main flavanone in grapefruit and is found in many fruits and herbs.

Naringenin has the skeleton structure of flavanones, with three hydroxyl groups at the 4', 5 and 7 carbon atoms. Naringenin can exist as a monomer, and there is also a glycoside form that is naringin, which has the added disaccharide new hesperose connected to the 7-position carbon atom.

Like most flavanones, naringenin has a chiral center on carbon 2, although the optical purity is variable. The racemization of S(-)-naringenin has been shown to occur fairly quickly.

Source and bioavailability of flavonoid naringenin

Naringenin and its glycosides are found in many herbs and fruits, including grapefruit, bergamot, lime, sour cherries and beans. The ratio of naringenin to naringin varies from source to source, as does the enantiomeric ratio.

The bioavailability of the naringin-7-glucoside form appears to be lower than that of the polyethylene glycol form.

After taking grapefruit juice, the plasma concentration of naringenin is higher than taking orange juice. The related compound kaempferol was also found in grapefruit, with its hydroxyl group next to the ketone group.

Naringenin can be absorbed from cooked tomato sauce. Every 10 grams of tomato paste contains 253 mg of naringenin. 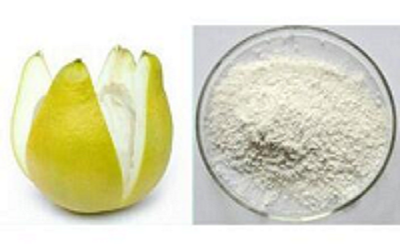 Biosynthesis and metabolism of naringin and naringenin

It is derived from malonyl CoA and 4-coumarin CoA. The latter is derived from phenylalanine. The obtained butenone acts on chalcone synthase to obtain chalcone. Chalcone then undergoes ring closure to produce naringenin.

Naringenin has an antibacterial effect on Staphylococcus epidermidis, Staphylococcus aureus, Bacillus subtilis, Xanthococcus and Escherichia coli. Further research has added the effects of Lactococcus lactis, Lactobacillus acidophilus, Actinomyces neresii, Oral Prevotella Lactobacillus acidophilus, Propionibacterium melanin, Porphyromonas gingivalis and Candida albicans, tropical and gram Evidence of antibacterial drugs such as Candida dauris. Although there is no evidence that naringin has any inhibitory effect on the urease activity of microorganisms, there is evidence that it has an antibacterial effect on Helicobacter pylori.

Naringenin can reduce the production of HCV-infected hepatocyte virus in vitro. This may be secondary to the effect of naringenin in inhibiting the secretion of very low-density lipoprotein. The antiviral effect of naringin is currently under clinical research. With regard to poliovirus, reports on the antiviral effects of HSV-1 and HSV-2 have also been published, although the replication of the virus has not been inhibited.

Naringenin has been proven to have significant antioxidant properties. In vitro and animal studies have proven that it can reduce DNA oxidative damage.

According to reports, naringenin can induce cytotoxicity in breast cancer, stomach cancer, liver cancer, cervical cancer, pancreatic cancer and colon tissue cancer cells, as well as leukemia cells. The mechanism of naringenin inhibiting the growth of human breast cancer has been confirmed. Based on this, two hypotheses of naringenin anti-cancer have been proposed. The first hypothesis is that naringenin inhibits aromatase, thereby reducing tumor growth. The second hypothesis proposes that the interaction with the estrogen receptor is the reason for its regulation of tumor growth. The new derivatives of naringin are active against multidrug-resistant cancers.