Foreword: Japan is the country that developed and applied phycocyanin earlier. Phycocyanin is also the only natural blue pigment approved by the US FDA. The European Union is also passing relevant laws and regulations. China's GB2760 food additives catalog also allows phycocyanin to be used as a natural colorant. Due to the lag in the industrial production and development of phycocyanin, China has not yet formulated a national standard for phycocyanin. However, due to the strong market demand and people's concern for healthy living, this trend is becoming more and more urgent. At present, on a global scale, the demand for natural red pigments and natural yellow pigments is increasing staggeringly, while the three basic colors of red, yellow and blue, natural blue pigments are less used. There are two main reasons for this. One is The lack of natural blue substances in nature. Second, the lack of major breakthroughs in the industrial production technology of phycoblue has led to high production costs. Japan’s DIC is one of the few companies that master the industrial production technology of phycocyan, but its production costs are also very high. It is expensive and difficult to meet the needs of the market. Therefore, if the production cost can be effectively controlled, phycocyanin has an irreplaceable position as a natural blue pigment, and its market capacity is very huge. 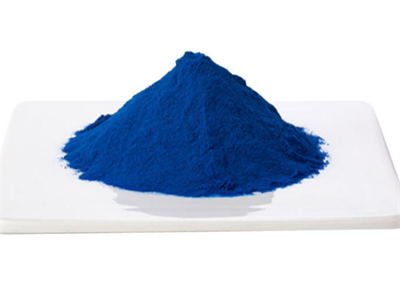 In addition, as a functional ingredient, phycocyanin has been continuously proven by scientific research institutions in anti-cancer, anti-inflammatory, blood enrichment, liver protection, ovarian maintenance, anti-oxidation, and increase in white blood cells. The fluorescent property of phycocyanin is also a tumor photodynamic target. The excellent materials for treatment are currently undergoing clinical application research in PLA 301 Hospital and PLA 210 Hospital. Phycocyanin-related health products and beauty products are relatively mature in Japan and Taiwan, while the domestic market is almost blank. However, in the past year or two, some companies have learned about phycocyanin and tried to develop it. Taizhou Binmei Bio is the first domestic unit to develop the industrial production of phycocyanin, breaking the foreign monopoly. For example, the phycocyanin beauty mask launched by Harbin Kekang Bio, the original collagen containing phycocyanin launched by Weihai Greian, and the phycocyanin health products developed by Shenzhen Neptunus Pharmaceutical Laboratory (the above are provided by our company). In the field of medicine, phycocyanin has been developed as a compound drug in the United States and Japan, and it has also been applied to the field of veterinary medicine in the United Kingdom and the United States. Phycocyanin is the light-harvesting antenna in seaweed cells, so it has certain prospects in the field of agriculture. The research of phycocyanin foliar fertilizer by Beijing Academy of Agricultural Sciences and Shandong Vegetable Research Institute has proved that it can better improve the photosynthesis of plants. It can improve the utilization rate of light and has antibacterial effect.

Phycocyanin (also known as phycocyanin) is a natural food coloring extracted and processed from cyanobacteria. Its components are phycocyanin and phycocyanin. Its color is blue. It is not only bright in color, but also in itself Very rich protein, its amino acid composition is complete, essential amino acids account for 37.2% of the total. Phycocyanin can help regulate the synthesis of a variety of important enzymes required by the human body, and play an important role in inhibiting the growth of cancer cells and promoting the regeneration of human cells. At the same time, phycocyanin can also regulate the human immune system, enhance the function of the immune system, and improve The body's resistance to disease. Therefore phycocyanin is called diamond food.

Properties: This product is a protein-binding pigment, a porphyrin pigment protein in cyanobacteria, and has the same properties as protein. Blue particles or powder. Dissolved in water. . Insoluble in alcohol and grease. Organic solvents such as ethanol can cause irreversible denaturation of phycocyanin. The color of its aqueous solution is bright blue.

Pigment obtained from the spores of Spirulina platensis Arthorspira platenis of the cyanobacteria Spirulina genus and extracted by modern biotechnology.

Phycocyanin extract features: The color of its aqueous solution is bright blue. Phycocyanin is a water-soluble protein consisting of a subunit and b unit. The molecular weight of the monomer (ab) is about 40,000 d. When the pH is 6.5-8.0, it is trisomy (ab), and when the pH is 4.5-6.0, it is hexa It exists in the form of body (ab) with a molecular weight of about 230,000 d. No matter it exists in the form of monomer, trisomer or hexamer, it all presents a beautiful sapphire color under visible light, the color is bright, and it is determined to be quite stable under a variety of physical and chemical factors.

A kind of phycobiliprotein, like phycocyanin, is a photosynthetic pigment that is ubiquitous in cyanobacteria, red algae and cryptophytes. The monomer is composed of an alpha peptide chain and a beta peptide chain, with a molecular weight of about 30,000, each of which is bound to a molecule of phycocyanin. The absorption spectrum of the trimer has an obvious absorption peak at 650 nm, a side absorption peak at 620 nm, an absorption band at 360 and 306 nm in the near-ultraviolet part, and a protein absorption peak at 278 nm. Cyanobacteria and red algae are the same. Allophycocyanin is coordinated and bound on the thylakoid side of the phycobiliprotein body, and has the effect of transmitting the excitation energy of phycoerythrin and phycocyanin to the chlorophyll α of the thylakoid.

It is one of the very rare proteins in nature. It is not only bright in color, but also a nutrient-rich protein. Its amino acid composition is complete, and the essential amino acid content is high, accounting for 37.42% of the total amino acid. Phycocyanin can help regulate and synthesize a variety of important enzymes required for human metabolism, and play an important role in inhibiting the growth of cancer cells and promoting the regeneration of human cells. At the same time, phycocyanin can also regulate the human immune system, enhance the function of the immune system, and improve The body's resistance to disease. Therefore, phycocyanin is vividly called "food diamond" by food experts.